Ok, so I like most people love Superman. He's the shining example of what most people strive to be. But why is it so hard to adapt him to the big screen? Click the jump to find out why....
Back in the 70s and 80s, Superman was brought to the big screen in a way that brought the character to life (Not counting the cellophane "S" that he threw from his chest....that was just weird) But ever since then, making the Man of Steel work on the big screen has been a damn near impossible task. So why is that exactly? I mean, he's Superman! How could the most iconic comic book character ever created be so hard to adapt to a movie? The short answer; because he's perfect. 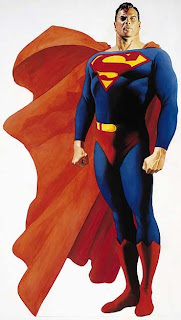 We mere human beings like a character that we can relate to. We like Spider-Man because he's (for the most part) an average guy like most of us. We like Batman because he's damaged (Like some part of many of us) But, we like Superman because he's everything we want to be, and as much as we like seeing that, we can't relate to that. We can't relate to a character who can't get hurt, can't die, and is SO damn good. Misery loves company, and Superman is like a looking glass version of what we should have become in life while many other comic book characters are versions of us as we are. So the trick to making a good and relatable Superman is to make him human while not nerfing his physical Supermanliness <----real word....I think....
The comic book writers of old ran into this when they realized that people could not relate to an invincible character. So they created Kryptonite. A substance that could hurt and kill Superman. Now that works with comic books which, when you look at them, are very short stories, but to hold the audience for a couple straight hours, you need more than a glowing green rock that makes Kal-El bleed. For my money, the most compelling Superman stories have been ones where he has to emotionally deal with something, moments that make him human. This is why I found Smallville (For the most part) so compelling. Because it was Clark Kent before he was Superman. He was still figuring his shit out, he was still finding his place in the world, he was like we were at his age, he was not perfect, he was not everything we are not in the form of a Demi God, he was not Superman.....yet.
Many writers have tried to make Superman vulnerable in many different ways, but making him indestructible without making him "perfect" is a good place to start for a movie. Now for the upcoming Superman movie "Man of Steel" directed by Zack Snyder, they are (supposedly) going this type of direction. It's the Superman story of him stepping up and becoming the man he needs to be; Becoming Superman. This is a much more relatable story because even though Superman is indestructible, most of us know what it's like to become the man we need to be. For ourselves, for someone else, for your kid, most of us know what that's like and what that takes. Showing The Man of Steel going through that and becoming Superman will immediately put him on the plane of "What we are" and "What we should be". A kind of "I am Superman and you can too" type of scenario If played right this could bring Superman back to being the inspirational figure he was created to be. It could make him the image of what we should and more importantly could be, not just a reminder of what we are not and what we failed to become. After all, his name is SuperMAN, not SuperGOD.
-Jeremy
Posted by JeremyJahns at 9:53 AM