Well, I guess with yet another Apocalypse theory on the eve of being proven wrong, and many more to come the CDC (Center for Disease Control) has an official protocol for the event of a zombie apocalypse....yeah, you heard that right. Click the jump to check this shit out... 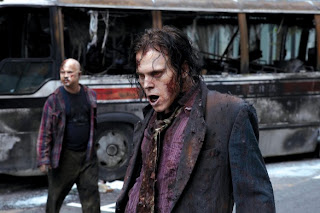 Better safe than sorry I guess. And I suppose the basic principles for surviving the zombie apocalypse apply to most other apocalyptic scenarios. But I just find it strange (Yet remarkably awesome) that such an official organization like the CDC has pretty much said "Ok yeah, we should probably prepare for that...". Granted they're trying to relate to the masses by linking a general/disaster famine scenario to what's popular nowadays. But near the end of the article, they say "If zombies did start roaming the streets, CDC would conduct an investigation much like any other disease outbreak". Which either brings down the credibility of the CDC, or makes the possibility of a Zombie Apocalypse all too real. (Is anyone else giddy at the thought? Actually come to think of it, what do they know that we don't?..... But if the crazies are right, you have about a day to prep your shit before the big 5-21 apocalypse, so get those molotovs ready; I'll be downtown picking off celeb look alikes from rooftop like the dude in "Dawn of the Dead".

Check out the most epic contingency plan of all time here:
http://emergency.cdc.gov/socialmedia/zombies_blog.asp

-Jeremy
Posted by JeremyJahns at 2:37 PM