We finally have our first look at Anne Hathaway as Catwoman......sort of......Click the Jump to check it out, and hear my thoughts.

Ok, I've been pretty optimistic about The Dark knight Rises. But now that we have our first look at Catwoman, I have to wonder if this is the final version of "Catwoman" that Selina Kyle adopts. I have to think they're going for the whole "By the end of the movie, she'll be Catwoman" approach because well....she really looks nothing like Catwoman. She looks like a hot chick wearing shades on the Bat-Pod sure (Which isn't ALL bad) but Catwoman?....naaahhh. I'd like to see a better pic, and i'll hold off my final judgement until I see more, but so far; all woman, no cat. It's interesting that she's riding the Bat Pod though.......


Anne Hathaway as Catwoman in The Dark Knight Rises 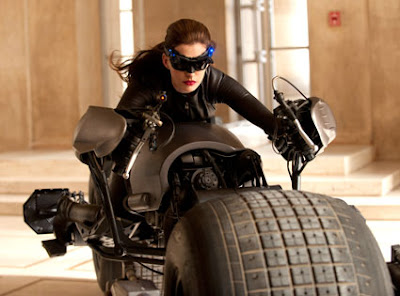